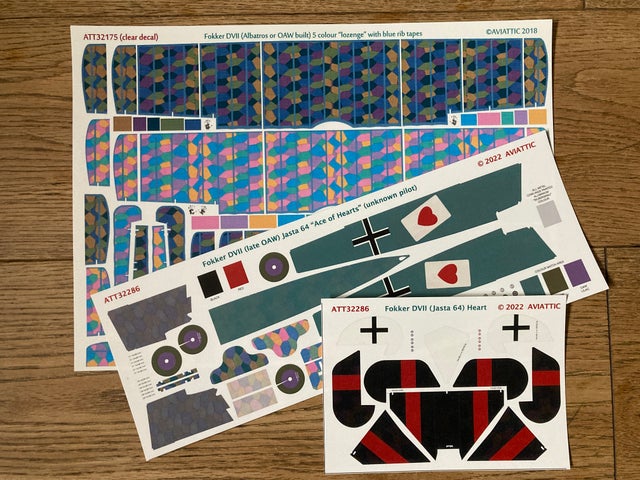 My interest in this little-known Jasta was inspired by an article in Over the Front journal which tantalisingly featured some airfield line-up photos of the unit (probably posed), ready for action.

One of the Jasta's machines, marked "Lot" (after a popular visiting nurse) has been featured as a WNW decal scheme and was a mid-period, OAW-built version kept as a squadron hack.

The line-up photos (again, Bruno came to the rescue by sharing high resolution photos with me) indicate the unit was furnished with the late-built cowling style DVII's in the late Summer and Autumn. The flag of Würtemburg-inspired tail stripes in black and red are a recent revelation, shared with me and then published in the Aeronaut book, "Jasta Colours, volume 1".

This, along with the green/turquoise fuselage and "silver/white" painted metal cowling areas (left-over "Silbergrau" paint from the stores?), makes for a very striking model!

Again this aircraft can be modelled from the WNW early Fokker-built or Albatros-built along with Aviattic cowling set ATTRES 043 and referring to the WNW instruction booklet.

These late machines may have been covered in 5 colour "lozenge" printed linen and so this is offered with the set.

Note : tapes on OAW built DVII's often appear typically light in tone. I have interpreted this as pale blue but could equally have been lozenge, natural linen or pink, express your preference, if you have one, when you order.