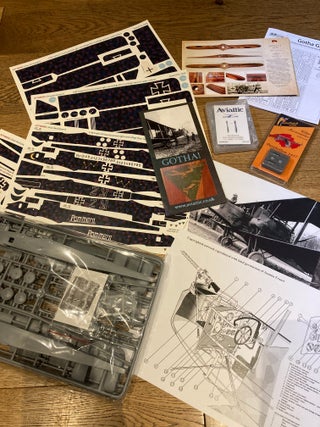 A year ago I was offered the last remaining sprues of this long-out-of-production kit and so felt obliged to give it the "Aviattic treatment" it deserved..

Neither Hippo nor AZ included ordnance or "night" camouflage decals with their productions and very limited markings options - which were not madly accurate - so this lovely kit has rarely been built..

Taking the work of the talented Rosario Bracchitta as a starting point (unfortunately the language barrier and different working practices meant a full collaboration was not possible), my son, Will and I painstakingly drew the random "night camo" patterns, using a few tantalising photos as reference and applied colours noted from crash reports of GV's downed over France and England.

These colours are my take on the five likely paint colours applied to some - but not all - aircraft.. Other combinations of four and five hand painted colours have been recorded and were studied by Harry and I years ago in the Imperial War Museum archives.

Many months of painstaking work from my decal designer Steve Cox and myself has resulted in a stunning set for this kit.

The kit's machine guns have been upgraded with beautiful Gaspatch versions of the slim-jacketed Parabellums - thanks, Costas!

Lukgraph kindly re-scaled their exquisite 50kg and 100kg 3d printed German bomb sets for me. You will just need to clean up the few tiny "build" contact points evident on some and scratch-build plastic or brass rod bomb racks, for which I suggest you download the WNW Gotha GIV instruction manual for inspiration and reference.

A dedicated P/E set was just a step too far for such a limited number of kits - even for me!..

A small amount of clean up is required to remove printing tree attachment points from the bomb set. 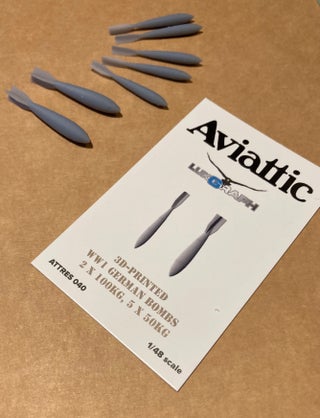 This set represents the common 50 and 100 kg type bombs.

A little clean up is required too remove printing attachment points.