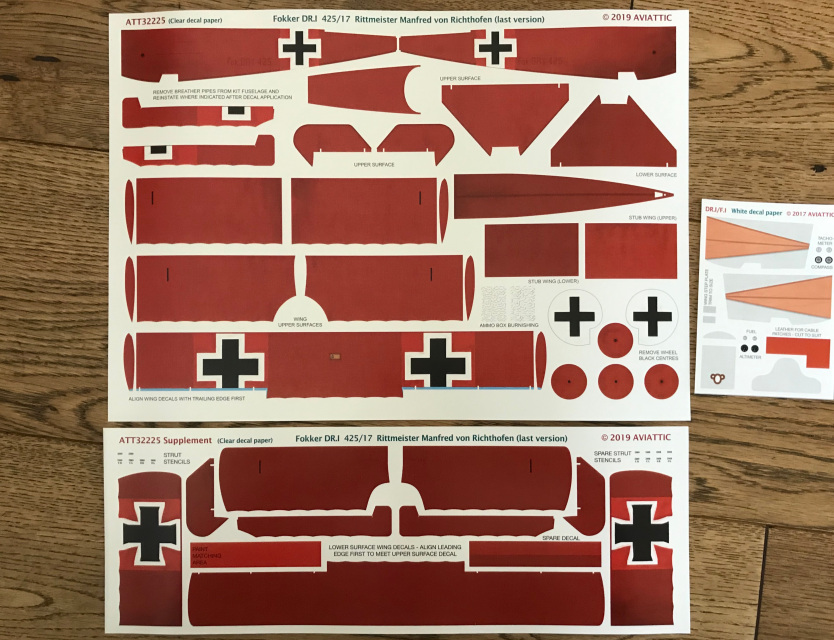 The iconic 425/17 is now believed to have been delivered in clear-doped natural linen upper surfaces and doped pale blue below.

Tell-tale sign of the blue undersurfaces practice in DR.I photographs is that the colour was continued onto the bottom fuselage longeron line and bordered the horizontal stabiliser and elevators.

The fact that this is visible indicates to me that blue is not present as an overall base colour on the upper surfaces of production DR.I's..

Many of the other relics held in collections and museums across the world show cracked red overpainting on two colours of pale blue (one of the blues has yellowed varnish making it appear "turquoise" - or was it yet another partial over-paint?

Others show no streaking evident under red paint.

One example shows a grey-like streaking colour present but on its own cannot be taken as "proof" of a streaked finish..any triplane relic could gave changed hands at the time, or since, in the belief it was from the MvR crash scene and may explain some of the anomalies between surviving samples.

425/17's metal parts were delivered in their natural aluminium finish - all ready for painting with what could be produced at the front. That exact shade of red paint could have come from many sources. As an oil based paint, most likely thinned and applied more than once, it was either from Jasta stores or a regular household type paint purchased or "acquired" locally.

Later overpainting of the national markings, to conform with Idflieg directives, has been done rather sloppily. Lines are imperfect and instructions on white border widths have been interpreted "loosely"..particularly the under wing crosses which must have been, clearly, difficult to apply and have a "that will do!.." look to them..

I'm sure Jasta 11 and other front line units had more important things to think about in the Spring of 1918.

Many thanks to Juanita Franzi and Alan Toelle for their input.