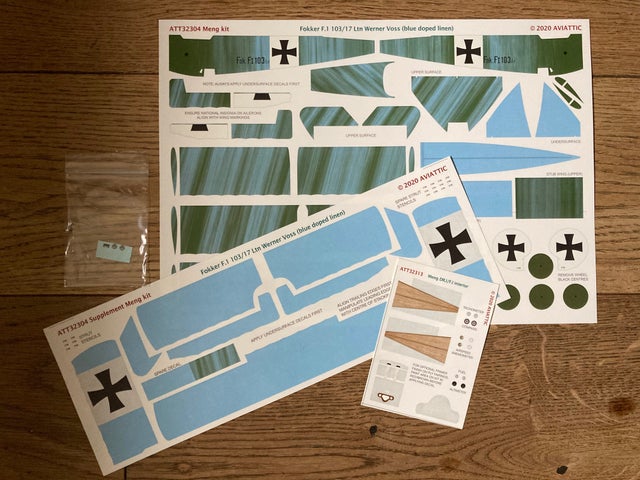 The triplane enjoyed a brief, successful period on the Western Front but eventually it's prowess as a nimble, fast climbing dog-fighter was superseded by it's lack of speed. Shoddy workmanship, which resulted in a series of fatal accidents, meant it was soon recalled and Idflieg-ordered changes were made to construction processes and covering techniques.

As a result it wasn't produced in great quantities and the fuselage serial number ranges were falsely increased to give the impression that many more were in service.

Both Wolff and Voss were killed in these first machines in September 1917.

I believe the prototypes had all linen covered areas painted pale blue before having the mid-green streaked camouflage applied. This set reflects that.

As chrome yellow was the adopted Jasta 10 recognition colour, Voss' machine may have had a replacement cowling painted this colour at some time in its very active but brief existence.

It is likely that 103/17 was fitted with a standard green cowling at the time of Voss' final battle as no mention was made on any combat report, despite each pilot having clear sight of it for several minutes, of a painted "face" or yellow..

These machines were not in service long enough for the poorly-applied fuselage varnish coat to discolour.