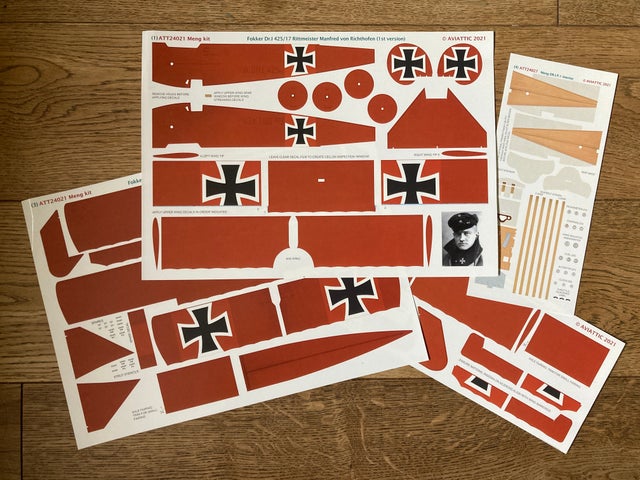 The iconic 425/17 is now believed to have been delivered in clear-doped natural linen upper surfaces and doped pale blue below.

Many of the other relics held in collections and museums across the world show cracked red overpainting on two colours of pale blue (one of the blues has yellowed varnish making it appear "turquoise" - or was it yet another partial over-paint?

Others clearly show no streaking evident under red paint.

One example shows a grey-like streaking colour present but on its own cannot be taken as "proof" of a streaked finish..any triplane fabric relic could gave changed hands at the time or since in the belief it was from the MvR crash scene and may explain some of the anomalies between surviving samples.

Unusually, 425/17's metal parts were delivered in their natural finish - all ready for painting with what could be produced at the front. That exact shade of red paint could have come from many sources. As an oil based paint, most likely thinned and applied more than once, it was either from Jasta stores or a regular household type paint purchased or "acquired" locally.

Many thanks to Juanita Franzi and Alan Toelle for their input into these conclusions which informed the choice of various tones used throughout the airframe decals.

We have simulated red paint over doped natural linen and pale blue painted linen, which presents two different tones. Oil and fuel staining also had an effect and all these combined factors explain the variations in colour exhibited throughout the various authenticated 425/217 remnants held in various collections and museums across the world.

Match your favourite brand of paint as close as you can to the purest red and blue of the decals for non-linen covered elements such as cowling, struts etc. A perfect match is not necessary.