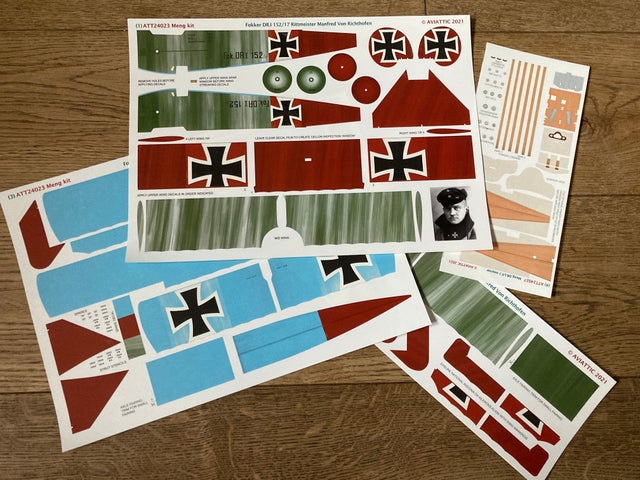 152/17 is thought to have been the Baron's mount for his 64th, 65th and 66th victories in March 1918. A Bristol Fighter F2b and two Sopwith Camels respectively. Though wounded and captured, the occupants of all three downings survived.

Conforming to the order to overpaint the large white national insignia fields, leaving a 5cm border in all positions seems to have coincided with the Jasta 11 red painted areas as identification markings.

Tonal variations in paint appearance can lead to many interpretations but few take into consideration the effect of light reflected on different painted surfaces seen in period photographs. There is a distinct difference between overpainting on an existing enamel painted metal surface (such as a factory-painted cowling, rudder or white insignia field) and that of doped and varnish linen. The variation in colours of Greg's well-known published photos have led to speculation that some area's white fields were overpainted green - and usually makes sense - but in the case of the Jasta 11 unit red markings to aid visibility in the air, doesn't...the difference in tonal values explained by the reflective effects on the surfaces. Note the appearance of the accepted "red" rudder and it's identical fuselage panel.