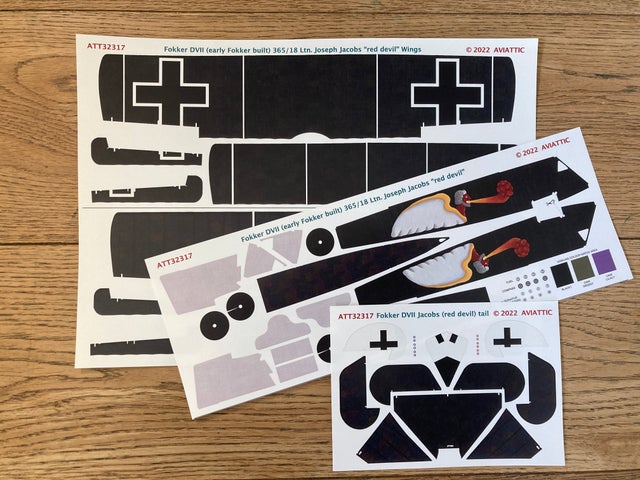 Jacobs famously chose to continue flying the Dr.I, favouring it's dog-fighting characteristics, even as the rest of his Jasta 7 Staffel mates were equipped with the outstanding Fokker DVII.

Just one photograph of the unit line-up shows both of Jacob's triplanes and his DVII clearly marked with a re-vamped version of the fire-breathing devil that adorned his black triplane.

These illustrations were painted by a talented member of the ground crew who, in civilian life, was an art student. Jacob's was delighted by it.

The DR.I's devil has been rendered many times in profiles and kit decals, based very loosely on a very poor photograph and an oil painting that belonged to the pilot.

These renderings are usually very cartoon-like and un-representative of the photograph and always seemed to me to be too crude to be the work of a talented artist and so, after careful examination, experimenting with tonal and scale comparisons to enhance detail lost in the photograph, I have interpreted the devil in a more artistic way, as many aircraft's artwork was very detailed and skilful. More believable than a metre high child-like cartoon..