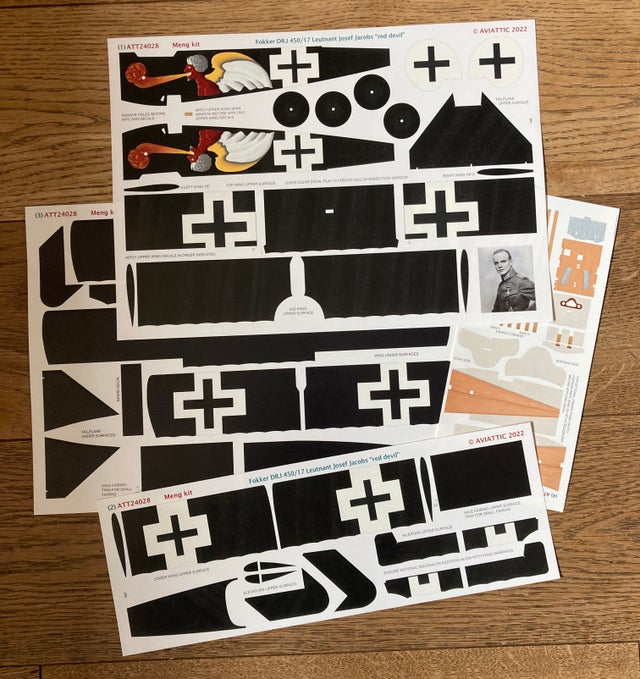 This iconic scheme has been unimaginatively rendered thus far but now I offer a much more "painterly" interpretation of this fire-breathing devil!

Painted by a young art student on the ground crew staff of Jasta 7, Jacob's was reportedly delighted by this surprise from his staffel-mates and I do not believe the artist would have produced a four-foot-tall crude cartoon, as usually portrayed..

So, after much careful study of the one available blurry photograph and the "dogfight" painting that Jacobs himself confirmed as the "correct" colouring (even though it shows fuselage crosses which were not present - never consider such recollections as 100% reliable), my art student son, Will and I have added the kind of detail that was present in so many better-documented illustrative paint schemes.

Converting our colour interpretation to grey-scale proved a revelation.

Two types of Allied propellers are included with the kit on dedicated "late production" sprue "H", suggesting a "Jacobs" special boxing was planned by WNW.. Jacobs various black DR.I's are photographed with both types fitted at some point (see photos).

Modellers can convert the factory-supplied Oberursel engine to Jacob's preferred captured Le Rhone by the deletion of the curved placard on the crankcase and - if you want to go the extra mile - replacing and re-positioning the nuts around the crankcase with aftermarket versions.